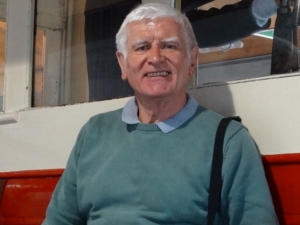 There is no question that fundraising has been a challenge for many charities as a result of the pandemic and here at The Hebron Trust we are no exception. However, one of our incredible trustees has come up with a novel and socially distanced way to raise funds…

Steve Whitby, our esteemed Treasurer, has decided to swim across the Atlantic …. in his local swimming pool! The distance of just over 2084 miles is the equivalent of swimming from South America to Africa and Steve will complete this staggering feat at The Victory Swim & Fitness Centre in North Walsham.

Steve started swimming regularly over ten years ago, as part of an effort to exercise more and as he grew fitter so he increased his swims and started undertaking challenges. This included taking part  in the ‘Swimtag system’ which measured lengths swum and set various challenges such as the Channel Crossing and Harwich to the Hook of Holland, for which he contributed 47 miles of  swimming for his team. It wasn’t long before Steve was looking at bigger challenges and opted for the longest one they had available – the Atlantic.

Beginning his mission in December 2017, Steve originally hoped to complete the challenge within 6 years but the effect of Covid-19 saw the pool close for 5 months over the summer and, again more  recently, during the second lockdown. As a result, he has extended this to possibly as long as 7.5 years, with a planned finish date of Summer 2025.

“I try to swim at least 4 or usually 5 mornings a week but the lockdowns this year have obviously made this even more of a challenge! However, I am delighted to have reached the 1000-mile milestone and I hope that by late January I will hit the half-way mark, which will of course be a big psychological hurdle to cross. The hardest part is adjusting your mind to the realisation that swimming the equivalent of the English Channel only takes you 1% of the way across the Atlantic!”

Having originally begun the challenge for fitness reasons, Steve quickly realised that people were keen to support such a mammoth task, so his main objective now is fundraising for The Hebron Trust and we are SO grateful for his support!

“I rather fell into an association with The Hebron Trust – I applied for a paid job but they offered me an unpaid one! That was about 16 years ago and I am humbled by the testimonies of women who have turned their lives around at Hebron. The amazing work done by the residents, staff and volunteers has resulted in the success rates of course completion and successful ongoing remission being  fell above the national average for residential rehabs. It is a charity absolutely deserving of our support.”

If you would like to support Steve, every penny helps us deliver the outstanding care we give the women who come to Hebron House, so please Click Here to donate. THANK YOU!

“Obviously the successful completion of the swim depends on my staying healthy and at 71 years of age I have to accept that my limitations will only increase. Having said that, I am currently fit and  am extremely stubborn, so am determined to go the whole distance and do some good for an amazing charity!”

Coping with Christmas
Scroll to top